The Les Mills fitness company originated in Auckland, New Zealand and was the brainchild of four-time Olympian Les Mills (and his equally impressive family) when he realised how successful group classes are at motivating participants. Their classes are made up of basic, proven keep fit exercises executed in a leading-edge way with an exhilarating soundtrack to match. The energy of the trainers is second to none and such a vital part of the programme. Earlier this month we were thrilled to be invited to a Les Mills Live weekend event in London, read on for our full review! 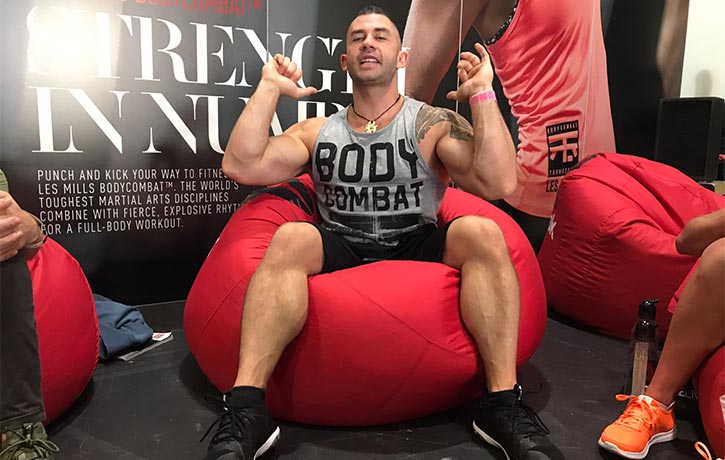 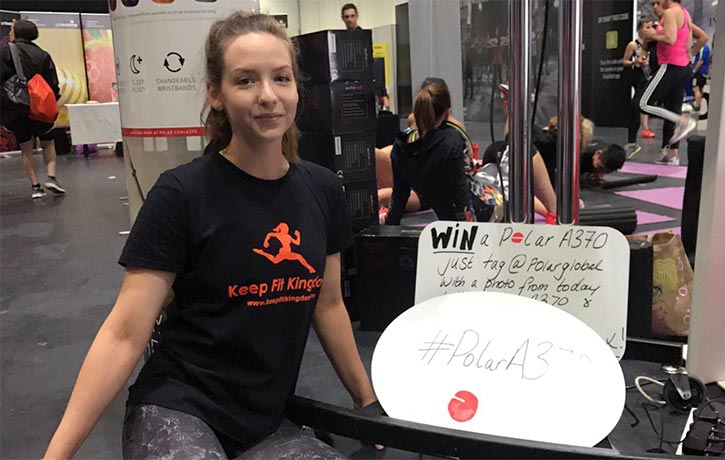 At the Polar A370 Activity Tracker stall 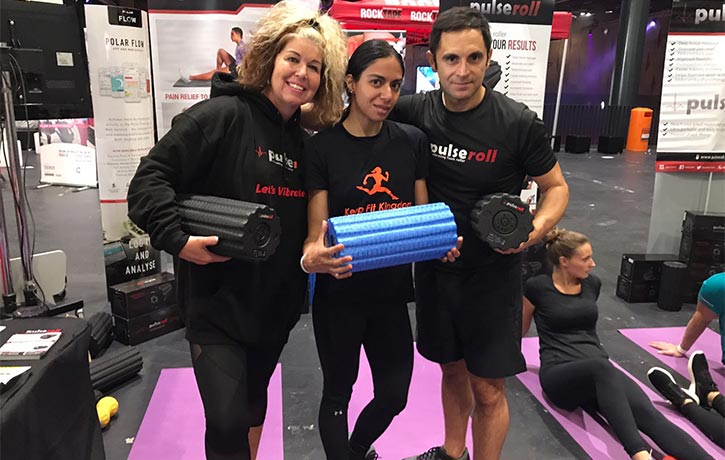 Learning how the Pulseroll has helped transform lives 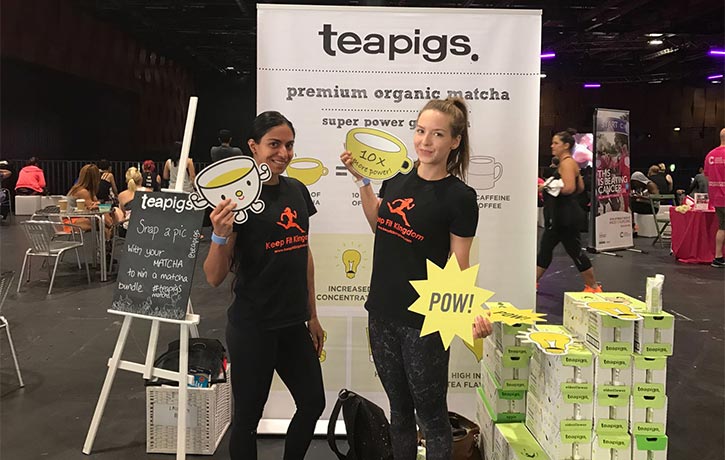 Up early with my workout gear on I was in for a busy and exciting day. I knew I was heading in the right direction as the number of people cladded in high fashion work out gear was steadily increasing. As I turned the corner I was greeted by the energetic buzz that can only be met by people who are pumped and ready to push their bodies to the limit and keen to do so. Freebies were thrust into my hands the moment I stepped into the aptly named Athletes’ Village – a programme, a bottle of bamboo water (something I was not aware was a health trend yet) and a Pulsin protein booster bar, which was far too tasty to be considered healthy. 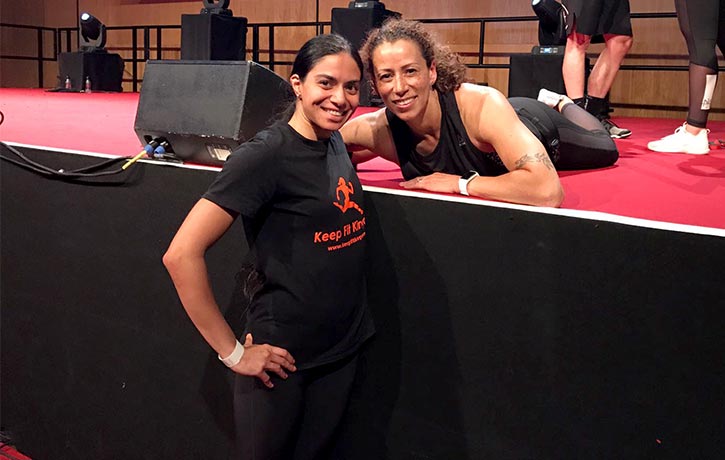 With one of the trainers from CXWORX 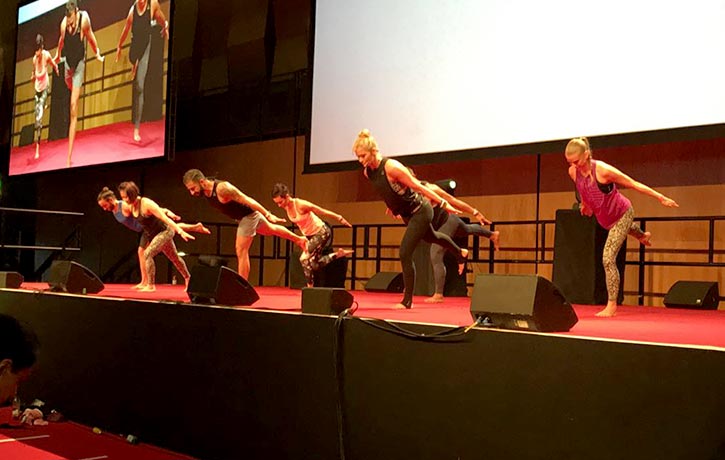 After registering, my colleague Dash and I were led into the press room. Our first talk was with Steve Tansey (Head of Research and Development) about the science of High Intensity Interval Training – HIIT for short. He started by explaining how HIIT is the quickest way to change the body and also about adaptation theory. He revealed a fascinating revelation of how to stimulate the release of human growth hormone (HGH) by certain exercises to maximise results. Human growth hormone is secreted from the spine, so exercises that put pressure on this at the start of the workout will mean more muscle growth and better results. He explained the importance of keeping the reps of HIIT no longer than 2 minutes as anything longer will put you in an aerobic state as opposed to an anaerobic state (anaerobic burns glycogen for fuel whereas aerobic uses oxygen). 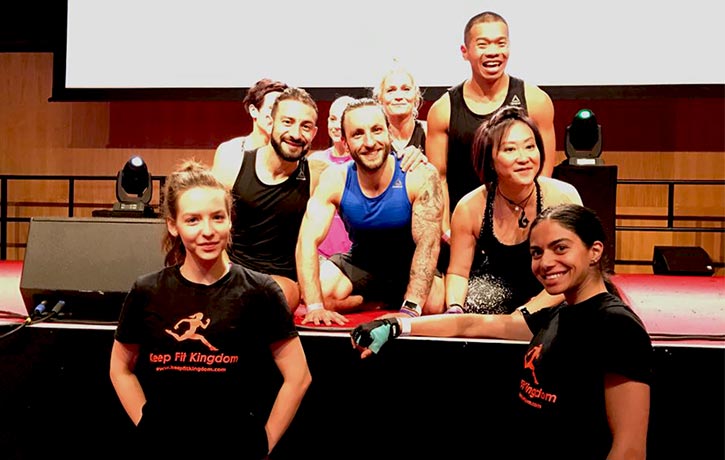 With the BodyBalance Trainers

The first class we attended was ‘Body Combat Anthems’ as per Steve’s recommendation.This class was like a concert combined with a martial arts class pumped up on steroids. The enthusiasm was contagious and the atmosphere really helped you to push yourself more than you would do alone. By the end of it my legs were jelly and my shoulders were screaming for a break! 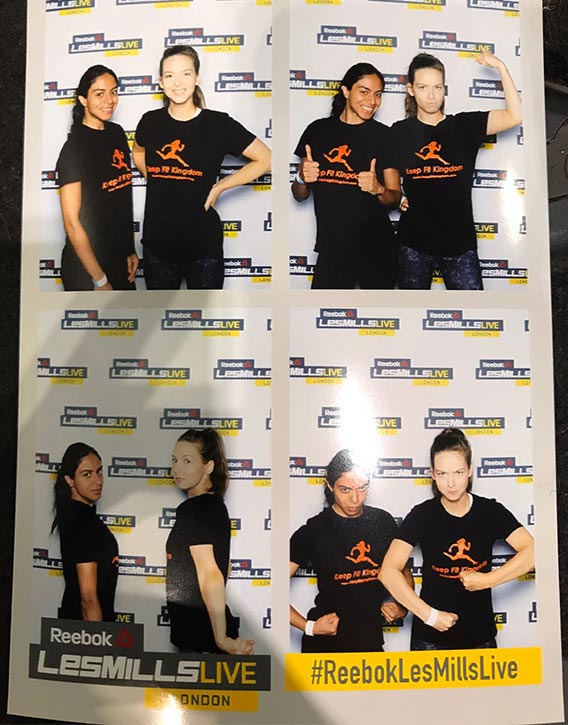 Goofing off in the photo booth 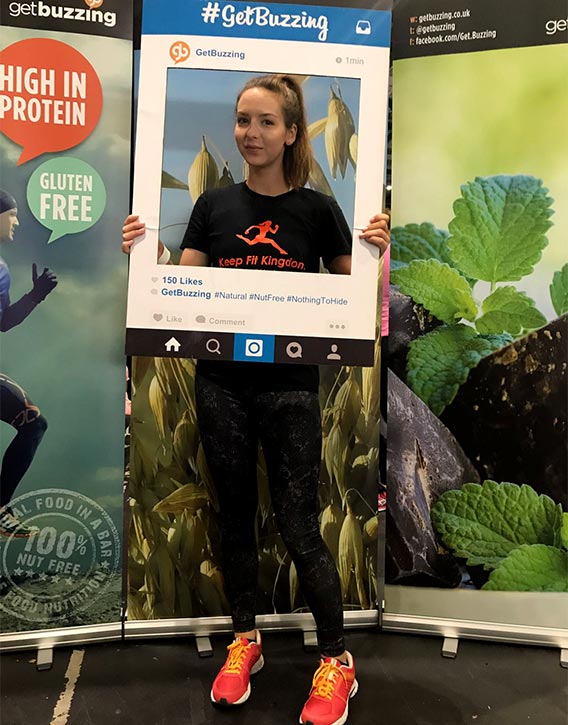 Getting in on the social media hype with GetBuzzing flapjacks

Post lunch we got to listen to Tommy Gentleman talk with passion about how he got to where he is and his favourite superhero -spoiler alert- he couldn’t choose just one! How he manages to balance family life with his hectic work schedule, and promoted his ‘Super Self’ podcast. 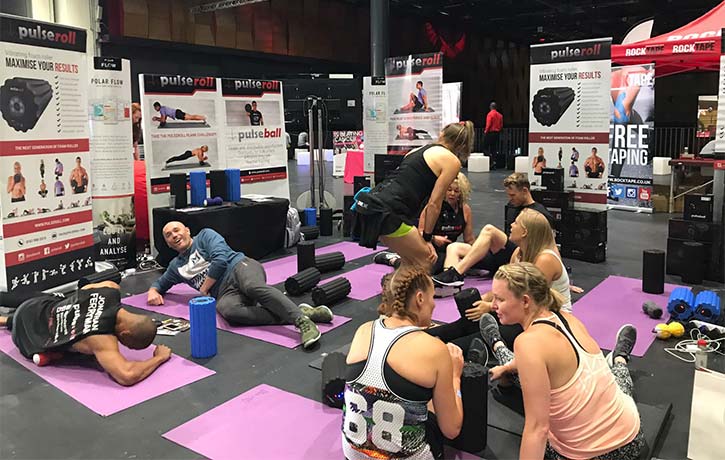 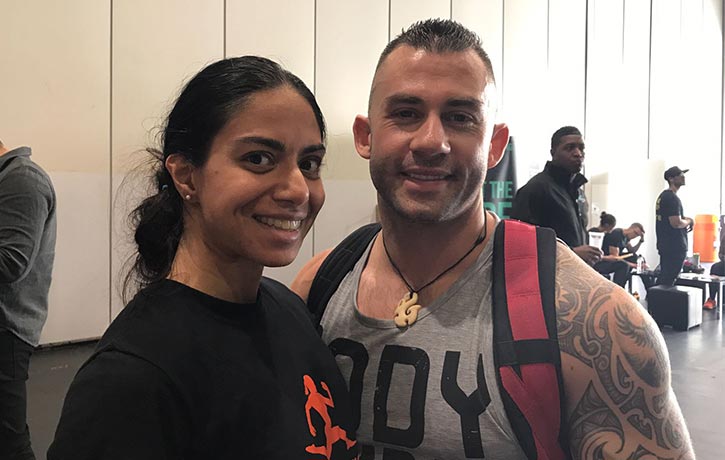 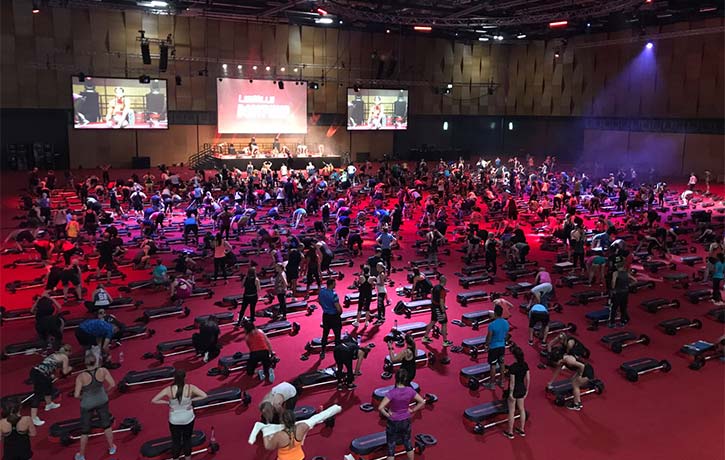 Is there a World Record for the largest Les Mills class 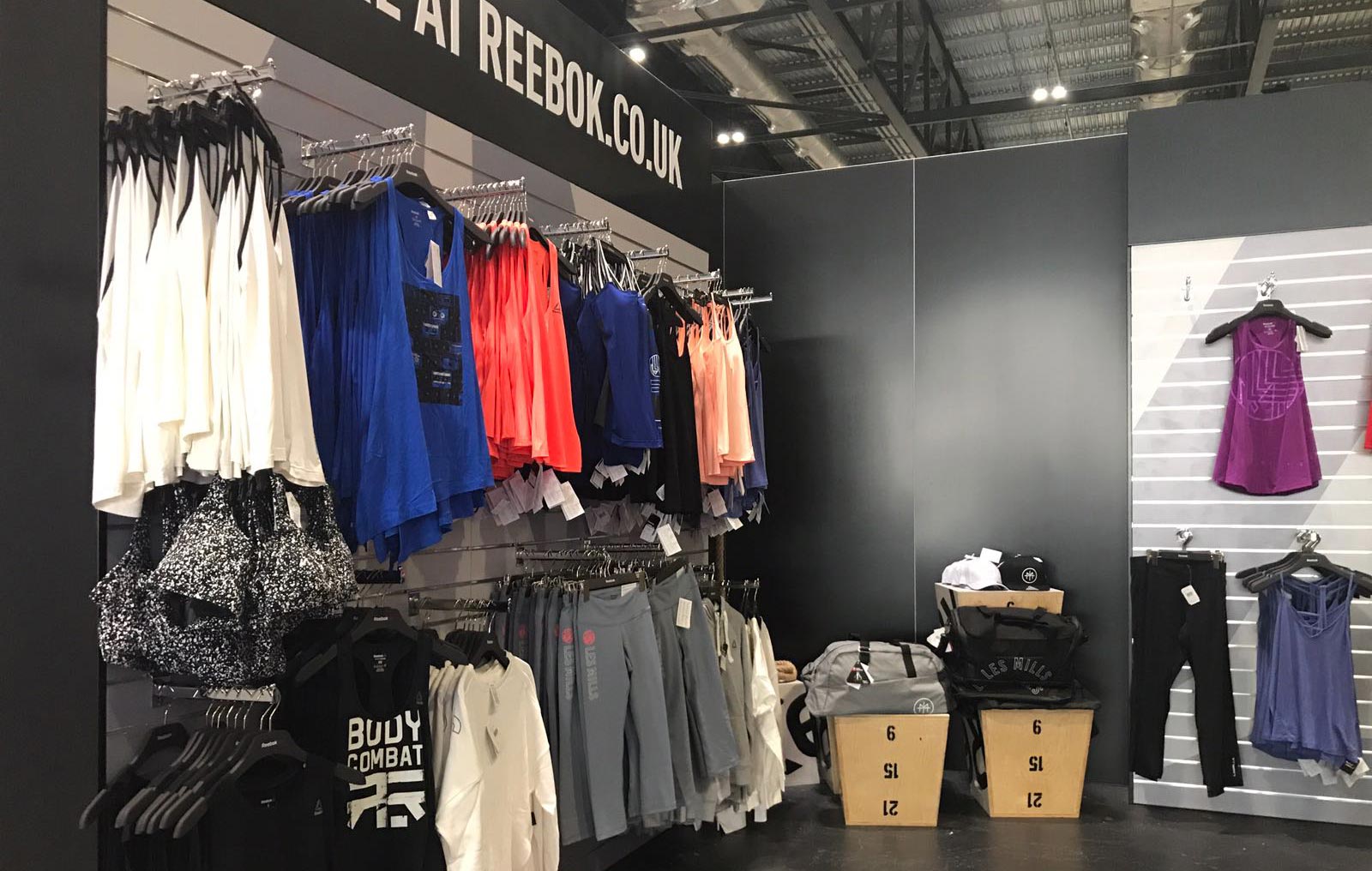 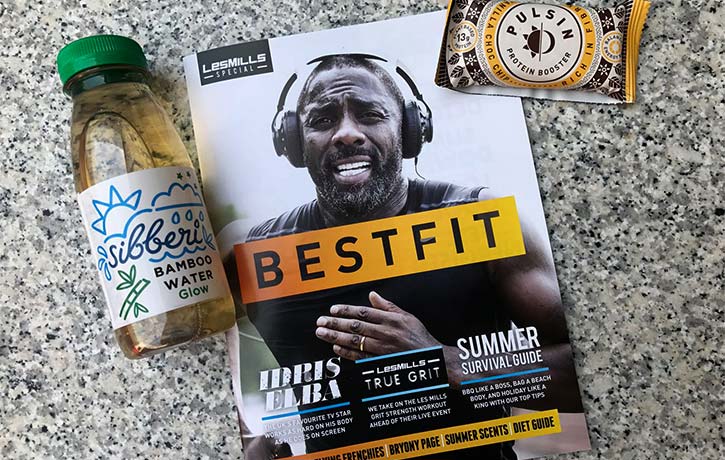 and in the goodie bag 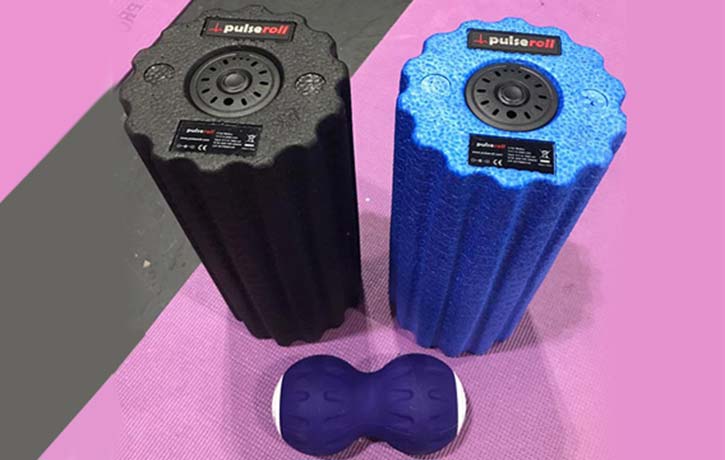 At this point it was time to scour our surroundings. We got to have a look around at the stalls, though small in numbers they showcased state-of-the-art health products – definitely ones to watch out for. The already popular Teapigs had a stall promoting their new matcha green tea drinks – delicious and full of antioxidants. Already in a drink form as opposed to powder so one I will absolutely be looking out for these in the shops. Tasty samples of ‘GetBuzzing’ flapjacks could not escape my curious, grasping hands. All nut-free with extra protein varieties available. 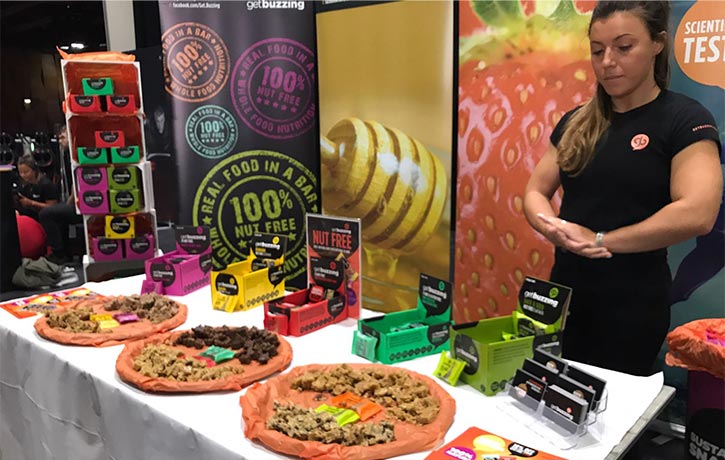 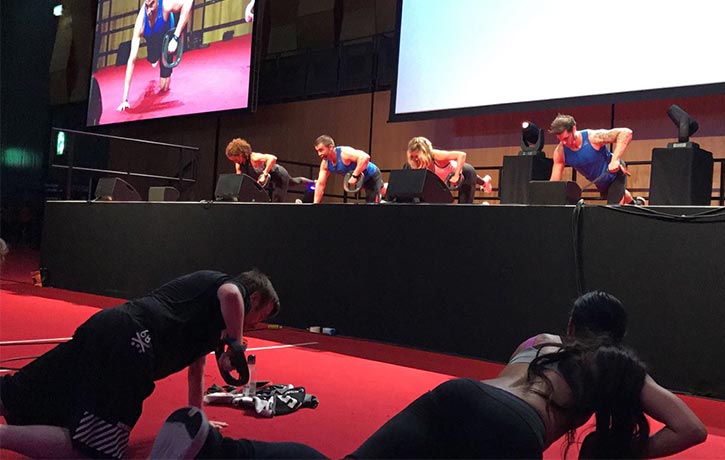 Working Hard in the CXWORX Class

After managing to grab Head Trainer, Sarah Durnsford for a quick chat…

…we headed to the ‘CXWORX’ a core-based workout with bands and weighted discs – my abs were on fire! The last class was ‘Body Balance’ as recommended by a few of the trainers. Body Balance is a yoga class to more modern music. It really helps to keep you focused and attentive whilst the breathing patterns help you feel relaxed, poised and energised. The perfect class to stretch my already sore muscles after a busy day.

…And with that the event was wrapped -phew! I took my new Les Mills bag, heavy laden with freebies and collapsed on the train seat, knowing that whilst my body thoroughly enjoyed the day, my muscles were going to pay for it handsomely tomorrow! Check out Les Mills for more info and upcoming events, their thriving, inspiring Facebook page, Twitter and Instagram. Have something to say about Les Mills exercise programs or working out in general? Let us know below or @ KeepFitKingdom !

Top 5 Foods to Improve Your Mood!